(An Autonomous Body under the Ministry of Earth Sciences, Govt. of India) 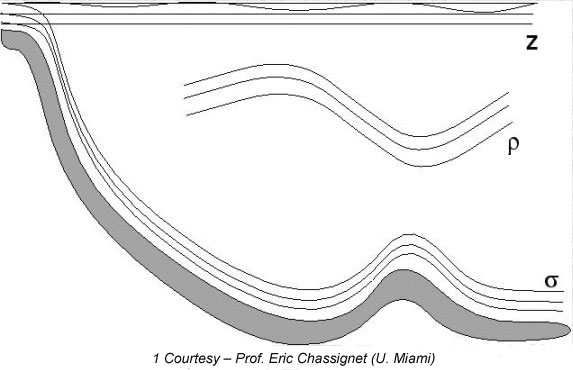 HYCOM (Bleck 2002) is a primitive equation general circulation model which is isopycnal in the open, stratified ocean, but uses the layered continuity equation to make a dynamically smooth transition to a terrain following coordinate in shallow coastal regions, and to z-level coordinates in the mixed layer and/or un-stratified seas. It maintains the significant advantages of an isopycnal model in stratified regions while allowing more vertical resolution near the surface and in shallow coastal areas, hence providing a better representation of the upper ocean physics. An ideal numerical ocean model should retain its water mass characteristics for centuries (typically done by isopycnic coordinates), have high vertical resolution in the surface mixed layer and maintain sufficient vertical resolution in un-stratified or weakly stratified regions of the ocean (typical nature of depth coordinates), and have high vertical resolution in coastal regions (attained by terrain following coordinates). HYCOM is designed to provide a major advantage over the existing operational global ocean prediction systems, by integrating all the required characteristics of above oceanic realms and it overcomes design limitations of the present systems as well as limitations in vertical and horizontal resolution to a great extent.

In this first setup model has longitude limits of 20E - 125E and latitude limits of 35S - 31N, with a 0.25ox0.25o horizontal resolution and has hybrid vertical coordinates, which is isopycnal in the open, interior, stratified ocean, while using a z-level coordinate in the mixed layer. The configuration has 28 hybrid layers in vertical and uses nonlocal K-profile parameterization (KPP) as the boundary layer mixing scheme (Large1994). It has river run off included using the Naval Research Laboratory's monthly climatology (Barron2002). The model uses Levitus climatology for the thermo haline fields and General Bathymetric Chart of the Oceans (GEBCO) bathymetry for bottom topography. The model is relaxed to climatology at southern and eastern boundaries with 50 E-folding days. This setup has been used to simulate Indian Ocean for the period starting from 2003 with NOGAPS 3 hourly atmospheric forcing parameters. The model simulations have been validated against observations and the details are available at validation section.

The 1/12th setup has been configured with the objective of assimilating satellite derived Sea surface height, Sea surface temperature, and vertical profiles of temperature and salinity in a phased manner. The model takes boundary conditions from Global HYCOM simulations at the eastern, southern and south western boundaries. The model has been presently run climatologically using NCEP2 climatological forcing and based on the performance evaluation fine tuning is being carried out. A parallel setup with global restart files and using GFS 3 hourly atmospheric forcing for inter-annual and forecast runs has been setup with assimilation of Sea level anomalies (Courtesy â Dr. Ashwanth Srinivasan, (U. Miami)) and is also being evaluated for its performance.