(An Autonomous Body under the Ministry of Earth Sciences, Govt. of India)

Over 30 million people live along the coastlines of India, and their livelihood is related to the Ocean in one way or the other. The marine activities would range from conventional fishing to high-tech oil and natural gas exploration; transportation of goods to search and rescue operations in the high seas. Accurate information and forecast of the state of the ocean surrounding the subcontinent is vital for the well being of the countrymen as well as for the socio-economic development of the country.

One of the most important user communities of the ocean-forecast services is the coastal fisherman community that venture into the seas for fishing and other activities for their livelihood. Over a dozen major sectors work in the marine regions viz., Shipping ports, fisheries, harbours, oil industry, Navy, Coast Guard, tourism, transport, research institutes, Hydrography, Survey of India, Geological Survey of India, maritime universities, who make use of the ocean information extensively for safe and optimal navigation. The country's growing interests on the ocean exploration demands accurate information and short term forecasts (at a very high resolution) of various oceanographic parameters such as temperature and salinity structure, currents at different depths, waves and tides, in the Indian Ocean as well as in the neighboring seas like south China Sea. One of the major industries that get directly benefited by the ocean forecasts is oil and natural gas industry where they would like to receive the forecasts of under currents in the sea in addition to the ocean state represented by the waves, tides, currents, etc. Maritime security also demands high resolution forecasts on the surface and subsurface features in the seas around India. This not only enables the Navy to identify safe and strategic zones under the waters to position their fleets, but also to protect the nation from the security threats from maritime forces of other countries.

In order to setup a state of the art operational ocean forecast system, It is proposed to have a hierachy of ocean general circulation model (OGCM) setups. At the finest resolution setups of the Regional Ocean Modeling System (ROMS) for the coastal waters of India, the models are able to resolve ocean at approximately 3.5 km x 3.5 km grid. It is proposed to have a series of such fine resolution ocean modeling system to cover the entire coastal waters of the country. These ROMS setups take boundary conditions from the basin-scale setup of a suitable OGCM. One such setup for the west coast of India (WC-HOOFS) is ready for experimental forecasts.

The OGCM, the Regional Ocean Modeling System (ROMS)  version 3.6, developed by Rutgers University, New Jersey, USA, has been used to set-up the Indian Ocean Forecast System (INDOFOS), which is being used as the operational ocean forecast system at INCOIS. In ROMS, primitive equations governing ocean dynamics and thermodynamics are discretized onto an Arakawa C- grid to obtain numerical solutions (Haidvogel et al., 2000; Shchepetkin and McWilliams, 2005). ROMS uses orthogonal curvilinear coordinates in the horizontal and stretched terrain following sigma coordinates in the vertical (Haidvogel et al., 2000; Song et al., 1994). ROMS is one of the most widely used ocean models for operational and experimental ocean forecasts in many parts of the world and currently, in INCOIS we have 1/8o ROMS set-up for operational forcasting (see Francis et al. [2013] for more details).

The domain of the Indian Ocean model based on ROMS extends from 30°E to 120°E in the east-west direction and from 30°S to 30°N in the north-south direction (Figure 1). The horizontal resolution of the Indian Ocean model is 1/12° (approximately 9 km) and it has 40 sigma levels in the vertical. The vertical stretching parameters are chosen in such a way that the vertical resolution is highest in the upper part of the ocean, there are approximately 26 levels in the top 200 m of the water column. The number of levels in the given depth of water column is more in the shallower regions. The lateral boundaries in the east and south are treated as open where the tracer and momentum fields are relaxed to INCOIS-GODAS using clamp boundary condition. The western and northern boundaries are solid walls with no-slip and no-normal flow conditions. 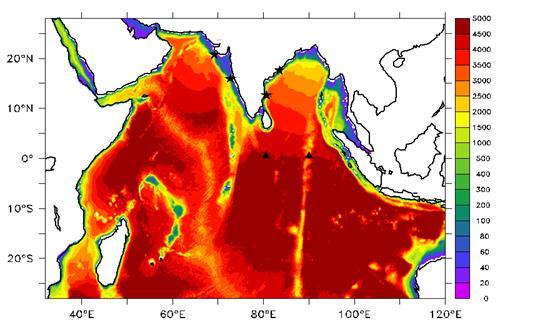 Figure 1: Map of model domain used to set-up Indian Ocean ROMS. The bathymetry (meter) shaded in color. Locations selected for validation of the model are marked with black triangles for RAMA equatorial ADCPs and with starts for the coastal ADCPs.

The model uses the KPP mixing scheme (Large et al., 1994) to parameterize the vertical mixing. A combination of harmonic and bi-harmonic viscosity and diffusion schemes are chosen for horizontal mixing. Bulk parameterization scheme is used for the computation of airsea fluxes of heat. Sea surface salinity is relaxed to the monthly climatological values derived from WOA 2009 (Antonov et al., 2010; Locarnini et al., 2010).

The model is initialized on 1 January 2010 using solutions derived from INCOIS-GODAS. Then model is run from January 2010 to August 2013 forced by six-hourly analysed atmospheric.

In the following figures, comparison of the currents simulated by the model with the observations from the an equatorial RAMA mooring and a few moorings along the coast of India. 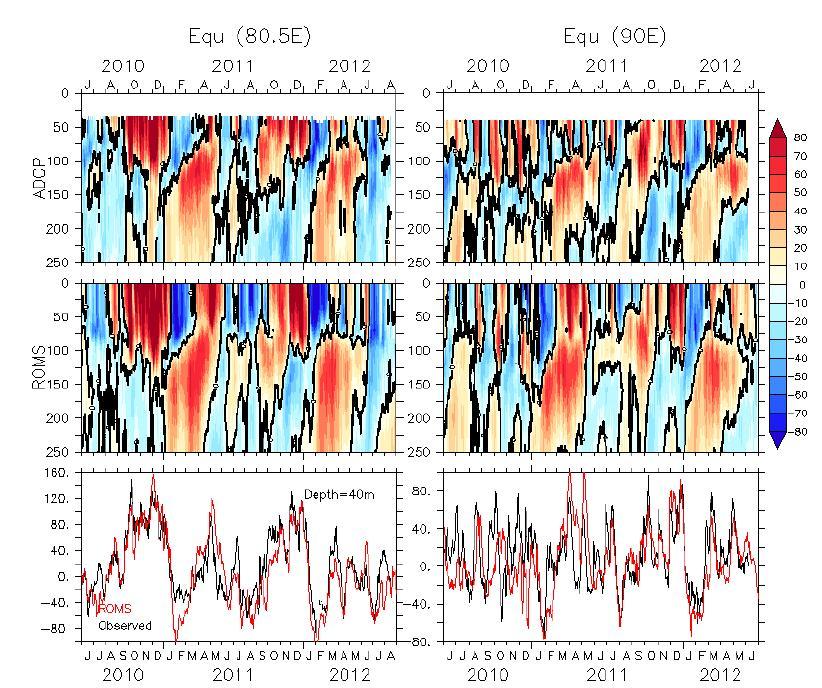 Figure 2: Comparison of model zonal curents with the equatorial RAMA moorings at 80.5oE (left panels) and at 90oE (right panels) . It suggests that model can accurately capture observed surface and sub-surface variability along the central and eastern equatorial Indian Ocean. 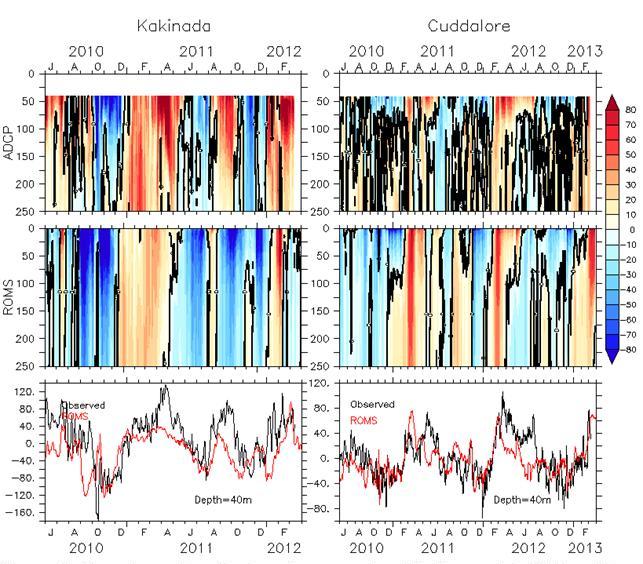 Figure 3: Comparison of model alongshore curents with the coastal ADCPs off Kakinada (left panels) and off Cuddalore (right panels) . Model can fairly captures dominant seasonal cycle and part of the intraseasonal variability along the east coast of India 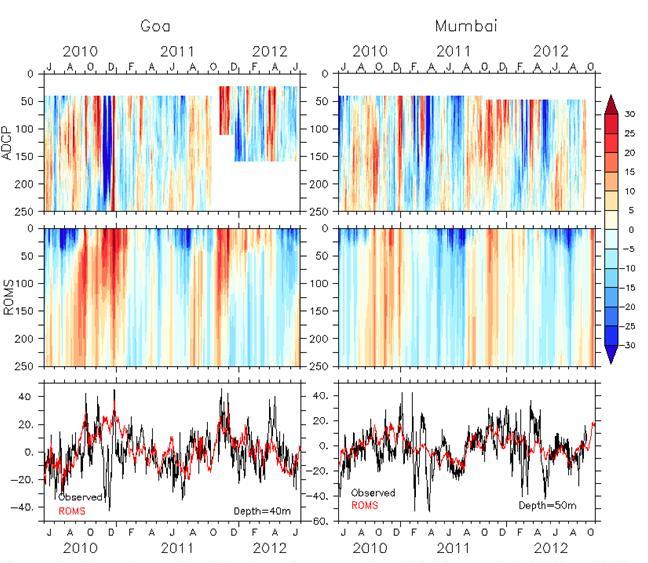 Figure 4: Comparison of model alongshore curents with the coastal ADCPs off Goa (left panels)and off Mumbai (right panels) . Model can fairly captures dominant seasonal cycle and part of the intraseasonal variability along the west coast of India.

High resolution coastal model of ROMS for the west coast of India (WC-HOOFS) has been setup as a pilot experiment to assess feasibility of these models to improve the prediction skills of coastal features, particularly the coastal circulation well in advance. Domain of the model setup is shown in the following figure. 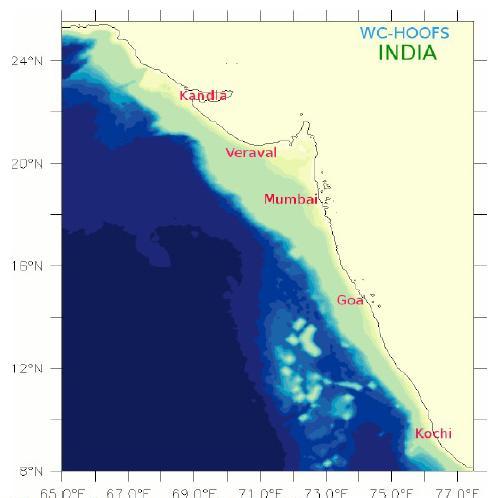 Figure 5: Domain of the WC-HOOFS

Several experiments were carried out to finalize the spatial resolution, model parameterizations etc. Comparison of the alongshore component of currents simulated by WC-HOOFS with the ADCP observations provided by National Institute of Oceanography for two regions (viz off- Goa and off- Mumbai) are shown in the figures given below. 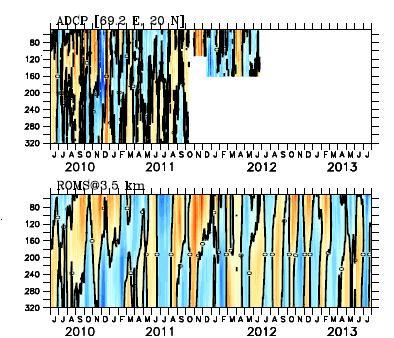 Figure 6: Comparison of the alongshore component of currents simulated by WC-HOOFS with the ADCP observations off- Goa. 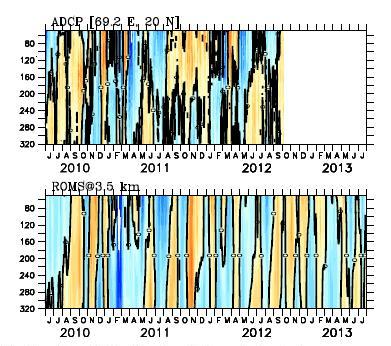 Figure 7: Comparison of the alongshore component of currents simulated by WC-HOOFS with the ADCP observations off- Mumbai.

As the assimilation of the data available on realtime is a key component of operational ocean forecast systems, INCOIS is in the process of developing an Enseble Kalman Filter (EnKF) based data assimilation scheme in the ROMS setup. It is proposed to assimilate temperature and salinity profiles from the moored buoys, XBTs and the ARGO floats and the sea level anomaly and sea surface temperature measured by the satellites.

Ecosystem modelling to study the biogeochemical variability in the Indian Ocean

Ecosystem Modelling is a key scientific technique by which we can elucidate the mechanism of marine system and predict its evolution in both the short and long term. As a first step to build the capability in ecosystem modeling, a bio-geo-chemical model based on ROMS at a horizontal resolution of 1/4o x 1/4o has been setup for the Indian Ocean domain. This model consists of the nitrogen cycle model with parameterized sediment denitrification and carbonate chemistry. The comparison between observed satellite-derived ocean-color images and model simulated chlorophyll demonstrates that the model is successfully capturing the seasonal inter-regional contrasts in sea surface chlorophyll distribution. The model is adequately characterizing two distinct growth periods of phytoplankton, bloom, one in summer during the South West Monsoon (SWM) and the other in winter during the North East Monsoon (NEM). The existence of subsurface oxygen maxima can also be seen during the spring inter-monsoon below the mixed layer which can be attributed to the process of photosynthesis in subsurface chlorophyll maximum zone. The model also effectively simulates the presence and characteristics of oxygen minimum zones (OMZs) in the Arabian Sea and Bay of Bengal. 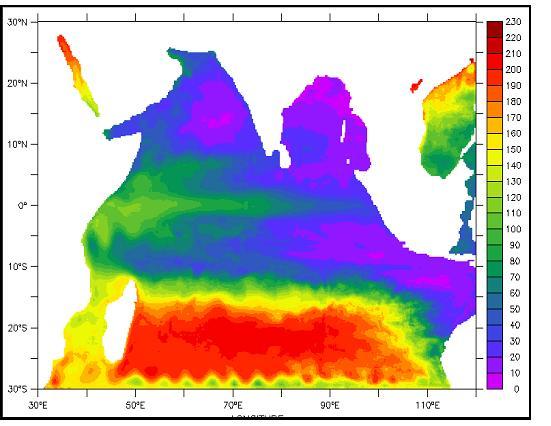 Figure 8: Climatological distribution of oxygen for the month of February at 160 m depth as simulated by ROMS-FENNEL model setup

During the X and XI Five year plans, INCOIS had supported the modeling activities at several academic institutions (IITs, IISc. and Universities) and research institutions (NIO, IITM, etc.) to develop the capabilities in ocean modeling and to develop models for the Indian Ocean region to simulate the parameters like, SST, salinity, ocean currents, mixed layer, wave heights and direction, water quality, etc. Projects on sediment transport along the Indian coast, estuarine circulation, tidal propagation in the estuaries, etc were also supported under this programme called INDOMOD or Indian Ocean Modelling and Dynamics. This support provided to the researchers in Indian institutions and universities have greatly helped in developing a pool of ocean modelers and developing the capabilities in ocean modeling in the country. Several researchers, succeeded in simulating some of the issues pertaining to Indian Ocean dynamics and in improving the understanding of Indian Ocean dynamics. Most of the findings from INDOMOD projects have already been published in peer reviewed national and international journals.

When it comes to the prediction of the behavior of ocean, it is necessary to device the methods to assimilate the available observations into the models to improve the accuracies of predictions. The availability of data from the Indian Ocean has considerably improved during the past decade due to the efforts of Ocean Observing System (OOS) projects implemented by the ministry. However, the capabilities in assimilation of ocean data in to the ocean models have not developed much in the country during the past years. Hence, it is necessary to make concerted efforts to develop the capabilities in ocean data assimilation and implementing them in the predictive models. Keeping this in mind, during the XII five year plan, INCOIS has already funded 9 R&D projects (for approximately Rupees 6.5 crores) submitted by scientists from various institutes/universities. The proposals are in different themes related to Ocean Modeling and Ocean data analysis. It is expected that the outcomes of these R&D projects will enhance our understanding on the region oceanography as well as contribute significantly to our efforts in establishing the state-of-the art operational ocean forecast system